The woods are lovely, dark and deep,

But I have promises to keep,

And miles to go before I sleep,

And miles to go before I sleep. 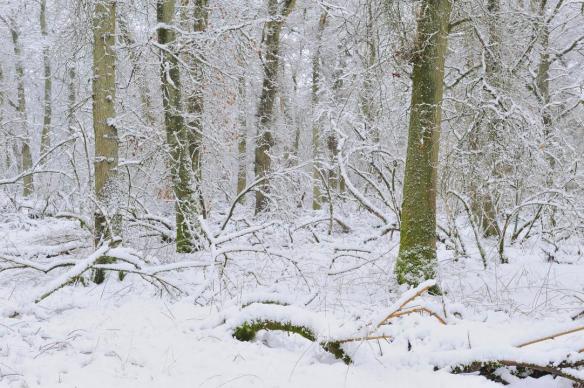 When temperatures fall, life can be very hard for our insects. Some species try to escape the cold by seeking shelter in protected places such as holes in the ground, under tree barks or even inside our homes; others, like bumblebees and some moths, generate internal heat by biochemical processes, just like we do. However, these strategies are not enough to protect such small creatures when it gets really cold.

Many insects just leave: some flies and butterflies undertake journeys of several thousand kilometres to spend the winter around the Mediterranean, returning to the UK in spring.

However, most insects cannot escape the cold British winters. For those that stay put, the greatest winter threat is the formation of ice inside their bodies. Ice crystals within their cells expand, destroying body tissues. If you’ve ever left lettuce or apples in the freezer, you will have seen the catastrophic effect of internal ice after they thaw.

To avoid freezing to death, insects have evolved the capability to go into diapause, which is a state of dormancy similar to hibernation. This can happen when they are eggs, pupae, larvae or adults, depending of the species. Diapause involves behavioural, biochemical and metabolic mechanisms, some of them complex and not completely understood.

We may think temperature prompts diapause, but in fact the daily interval during which the insect is exposed to light (known as photoperiod) is the main trigger. Temperature alone is not a very reliable yardstick; a cold spell may induce diapause too early, and a prolonged autumn may delay it. Either way, the wrong timing could be fatal.

When photoperiod reaches a threshold, a genetically programmed series of events kicks in as the organism prepares for diapause. In the case of an adult insect, it begins accumulating fats, proteins and carbohydrates to keep it fed until the end of cold period, and hormones and enzymes induce a thickening of the cuticle (‘skin’) to reduce water loss. The insect then will look for a safe, well-hidden spot.

As the insect enters diapause, oxygen consumption, feeding and movements are reduced. It then produces large amounts of cryoprotectant (cryo = cold) substances such as proteins, sugars and glycerol, which act as antifreeze – similarly to the products we use in our cars. In the same way that vodka in the freezer remains liquid, these compounds don’t freeze.

By lying dormant in tree trunks, under rocks and cosy holes in the ground, and topped up with natural antifreeze chemicals, the insect has a good chance of surviving the winter. These adaptations are far from perfect; overall winter mortality is high, and for many species just a few individuals can cope. In the case of bumblebees and wasps for example, only queens make it through the winter: all other members of their colonies die at the end of the season.

But the resilience of some insects is truly admirable. The flightless Antarctic midge (Belgica antarctica) produces large amounts of antifreeze sugars and loses up to 70% of its body water when conditions deteriorate. It becomes so dehydrated that it can’t freeze. The Arctic woolly bear moth (Gynaephora groenlandica) spends roughly 90% of its life in diapause, and it survives temperatures as low as −70 °C. But by far the champions of cold resistance are the insect-related Tardigrades, known as water bears. These fantastic animals can survive in suspended animation at −20 °C for 30 years. Not bad for a creature of less than 1.5 mm in size.